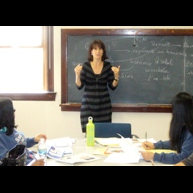 Lorraine Piroux teaches Ancien Régime French literature and culture. Her research focuses on the material culture of literature, including Enlightenment print culture, authorship studies, and 18th-century aesthetics. Her book Moins que livres: essai sur l’illisibilité, du livre des Lumières à la boîte de Cornell (Éditions Nota Bene, 2010)  is a study of literary and artistic voices that have contested the ideal of ultra-legibility that has presided over the Western book-form since the Enlightenment. With these voices, the printed book is being torn, desecrated, reinvented, and tested against the irreducible materiality of the written sign, as if to alert us to the long-standing complicity between writing and the book-object. She is also the author of Le livre en trompe l’oeil ou le jeu de la dédicace (Editions Kimé, 1998) and several articles on Diderot, Rousseau, Graffigny, and Bernardin de Saint-Pierre. Her current project focuses on authorlessness and impersonal authorship in eighteenth-century prose and dramatic fiction.

In 2000-01, she was a fellow at Stanford Humanities Center, and she has received the William Riley Parker prize for her essay “The Encyclopedist and the Peruvian Princess: The Poetics of Illegibility in French Enlightenment Book Culture” (PMLA, January 2006).

She has been co-organizing the Rutgers Seminar on the History of the Book since 2007.